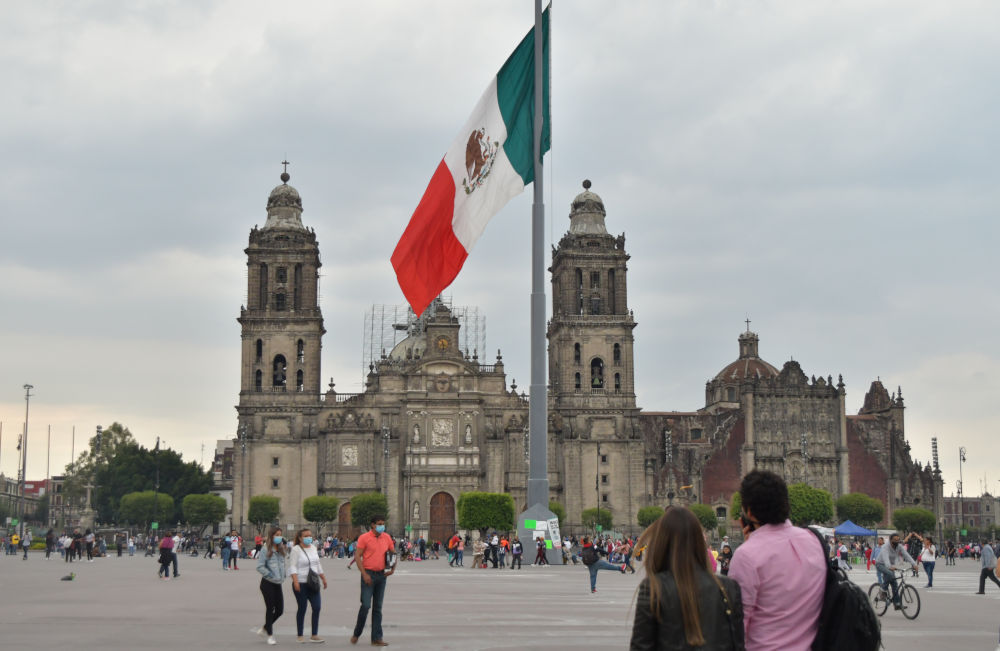 The Simon Bolivar Institute for Peace and Solidarity Among Peoples sent an electoral accompaniment mission to Mexico City for the midterm elections on June 6. The Simon Bolivar Institute congratulates the people of Mexico for the important display of commitment to democracy during Mexico’s largest elections with over 20,000 offices at stake, including all 500 members of the Chamber of Deputies, 15 Governors, and the 16 Mayors of Mexico City.

These elections took place at the halfway mark of President Andrés Manuel López Obrador (AMLO), which led the mainstream media to portray them as a test of AMLO’s overall approval and that of his party and the project of Fourth Transformation. It was also Mexico’s first election since the beginning of the Covid-19 pandemic. AMLO called on the population to express themselves democratically, and the people responded favorably with a 52,6% participation rate, above average for midterm elections.

Historical and structural issues made these elections challenging. Throughout the campaign, 91 candidates were murdered, and it is presumed that much of the violence stems from drug trafficking-related crimes. Other problems, common in previous elections, were also present, such as the vote buying and other forms of irregularities that can be common in manual voting systems when no law enforcement is safeguarding voting booths. Despite all of these challenges the high voter turnout shows that Mexico has embarked on a path of democratic renewal and that the majority of Mexican voters felt motivated to participate.

On the other hand, there were also important advances such as greater gender parity. As a matter of fact, Mexico will now have the highest number of female governors in its history after 6 out of the 15 races were won by women. Likewise, elected deputies almost achieved parity as 146 women, and 153 men were elected, while half of Mexico City’s mayors will be women as well. In addition, female indigenous representatives increased from 3 to 12 as well. Finally, it is also worth noting that nearly 12,000 Mexicans abroad were also able to cast votes.
Attempts at foreign intervention in the elections were also present. In particular, the Organization of American States (OAS) stood out as its Secretary-General, Luis Almagro, once again, without a political mandate from the States he is supposed to represent, engaged in an attack on the sitting government. Numerous countries and international organisms criticized Almagro’s actions, including ALBA-TCP.

The results gave a significant victory to the Fourth Transformation project headed by AMLO and Morena. Together with their allies – the Labor Party (PT) and the Ecologist Green Party of Mexico (PVEM), obtained the majority of seats at the Chamber of Deputies, enough to allow them to approve important legislation such as budgets, and brought them very close to the 2/3 majority needed for constitutional reforms. In addition, Morena and allies also won 12 of the 15 governor races at stake.

Morena faced a significant setback in Mexico City, where it could not hold on to half of the mayors. Moreover, a major accident a few months back on the subway rail had a negative impact on the current city authorities. Therefore, it became more visible during the campaign where the traditional parties on the right, the Institutional Revolutionary Party (PRI) and the National Action Party (PAN), allied with the Party of the Democratic Revolution (PRD) and mostly campaigned on an anti-Morena or anti-AMLO platform.

A renewed Congress and new local authorities will now have to lead Mexico through its challenges. The day after the election, U.S. Vice President Kamala Harris also visited Mexico City, seeking to push her immigration policy. AMLO and Morena now have renewed strength to lead their Fourth Transformation project. AMLO also pointed at a critical element: popular support. “More people, as many people as necessary.”

This will be important as Mexico’s social movements are currently pushing forward many struggles and demands: a strong feminist movement demands an end to femicides; numerous campaigns are demanding the return of the disappeared and the defense of human rights; teachers unions have mobilized throughout the country in favor of a new education program and defense of the rights of education students; housing rights movements have stood up against gentrification; and many more which have been in constant insurrection against neoliberalism and like Emiliano Zapata, would “rather die standing than live a whole life on their knees.”