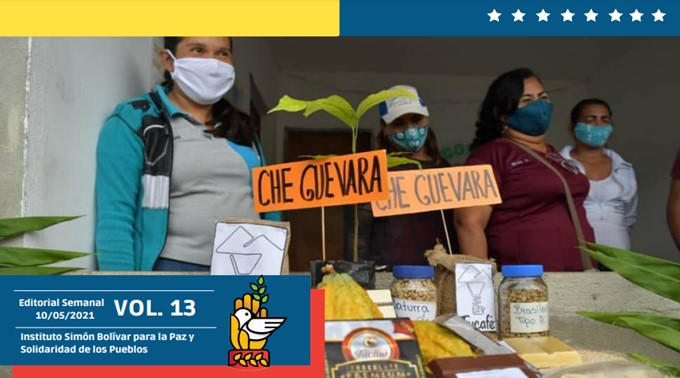 On May 8, we participated in “Seeds for the Union,” the first communal exchange of seeds organized by the Che Guevara and El Maizal communes. This is a project being put forward by the Union of Communes (Unión Comunera). The event took place during the commemoration of the Che Guevara Commune’s 8th anniversary. Local organizations there have recovered the farming of cocoa and now are producing chocolate.  They contributed to this first seed exchange with cocoa and coffee seeds.  Members of El Maizal brought corn and black bean seeds from their production in the area where the states of Lara and Portuguesa meet.

Both communes are examples of what can be achieved through popular organization and political consciousness. This is an agro-ecological exchange in the spirit of solidarity that guides the purpose of the communes.  In a time of severe blockade, the communards have shown that our native seeds can be recovered and that through solidarity, communes can help each other grow when resources are scarce.  Furthermore, their cooperation transcends just the component of production. Political education is also part of this cooperation, a necessary element for strengthening social relations and understanding the current conjuncture.

There was also an important internationalist presence at the event.  The Landless Rural Workers Movement of Brazil (MST) shared a donation of their agro-ecological seeds for this exchange in a display of solidarity and commitment to the common cause of people’s emancipation.