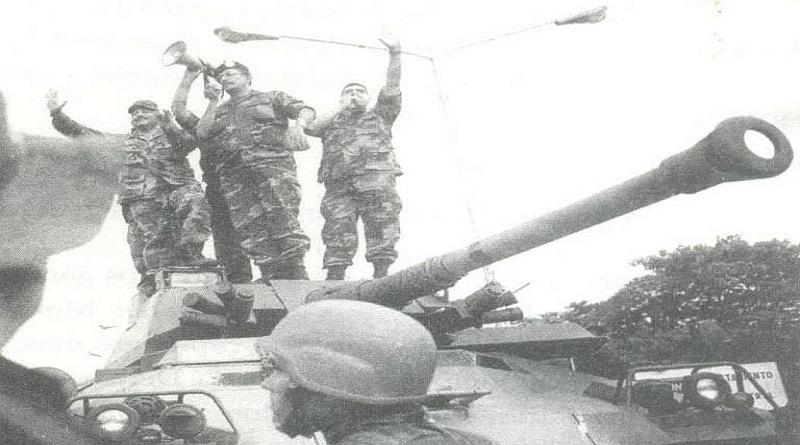 With profound sorrow, we learned of the sudden passing of General Jorge Luis Garcia Carneiro, Governor of La Guaira.  On April 13, 2002, during the heavy days of the coup, he stood on top of a tank at the gates of Fort Tiuna and spoke to the thousands of Venezuelans that had come to demand the restitution of President Hugo Chavez. He pledged loyalty to the Bolivarian Constitution of 1999 and the rule of Law, reminding the people that their presence at the fort was essential for maintaining democracy. The unity of the Bolivarian Revolution made up of civilians and the military, came into action to preserve democracy.

Garcia Carneiro was born in a working-class family in the popular sector of El Valle, in Caracas, and entered the Military Academy in 1971, where he met President Hugo Chavez. He rose in rank, and soon after the failed 2002 coup, Garcia Carneiro was named Minister of Defense. He also served the revolution as Minister for Social Development and Popular Participation, where he was tasked with the social mission (program) to combat homelessness called Negra Hipólita. Under his tenure, homelessness decreased and became a situation suffered by a few individuals but no longer by entire families. Garcia Carneiro was elected Governor of La Guaira in 2008 and later re-elected in 2012 and 2017. He passed away as one of the most popular Governors in Venezuela.

After the failed coup, Garcia Carneiro supported adopting new perspectives on defense that would prepare the population to resist in the case of another imperialist aggression aimed at regime change. He promoted the concept of Comprehensive Defense, which acknowledged significant historical struggles. In his own words: “…that is a revolutionary concept. The President [Chavez] speaks of a new national defense concept that we also support. It is based on three ideas or essential axes: strengthening the Armed Forces, the civil-military union, and the people’s movement… It is the all-people’s defense, under the circumstances of the Venezuelan situation. Knowing the position that the United States has against Iraq, with an extremely powerful army, with very sophisticated weapons, we are taking precautions as well for a completely asymmetrical struggle, of the irregular type, in the case of a contingency. We do not have to see it from the perspective that every person will have a rifle. The concept of comprehensive defense recognizes the need to prepare the reserves, teach the people to defend themselves, and train them in the face of a difficult situation”.

“Unite we must. Without necessarily sacrificing our sovereignties, big or small, we can, here and now, forge a political union based on Defense, Foreign Affairs, and Diplomacy, and a common Citizenship, an African currency, an African Monetary Zone, and an African Central Bank. We must unite in order to achieve the full liberation of our continent…

… So many blessings must flow from our unity; so many disasters must follow on our continued disunity, that our failure to unite today will not be attributed by posterity only to faulty reasoning and lack of courage, but to our capitulation before the forces of imperialism…”